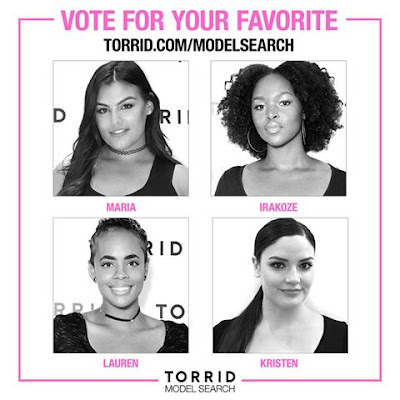 Image Credit: Torrid
Last week, Torrid announced the Top Ten finalists for their 2017 Face of Torrid Model Search. Yesterday, it was announced the finalists have been narrow down to the Final Four. After the ten ladies strutted their stuff in several looks from the Holiday collection the judging panel including 2016 Face of Torrid Model Search winner Lyanna Lynette picked the four ladies who would going to the next round.
This year, Torrid is doing things a little differently as far as voting.  They are letting America decide who will be crown the 2017 Face of Torrid.  Cast your vote from now until October 28th for your favorite model by clicking here.  The winner will be announced in January.
All opinions expressed on the blog appear courtesy of Tamarah Brown for My Own Sense of Fashion © unless otherwise stated (i.e interviews).  No use or reproduction may occur without the written consent of the author.
Follow us on Facebook ,  Instagram, and Twitter  to see what we have in store. Let us know what topic you would like next on the blog.